Reproducing this NRLA blog item here from 'London Property Licensing' as it clearly describes the processes to be followed and the hurdles passed when introducing Additional Licensing.

The Royal Borough of Greenwich is potentially looking to consult on the renewal of their borough-wide additional licensing, which is due to come to an end in September this year.

As part of the National Residential Landlord Association's (NRLA's) campaigning on local government, a series of audits will be carried out on active discretionary licensing schemes to ensure complete transparency and accountability, with the long-term aim for local authorities to become more hesitant in taking a scheme forward and instead focusing on other methods to regulate and enforce against criminal landlords.

In anticipation of the council's plans, the NRLA has prepared a brief on the current scheme using the information provided through FOI requests.

The Royal Borough of Greenwich is a London borough located in the Southeast of the capital, covering a total area of 18 square miles. Since 1st October 2017, the council have operated a borough-wide additional licensing scheme which is due to come to an end in September 2022, which covers just over 6,500 HMOs.

This scheme applies to all HMOs in the borough, covering all properties shared by three or more persons who are not all related and share facilities such as the kitchen and bathroom, as well as 'section 257 HMOs', which are properties that have been converted into self-contained flats, less than two-thirds of the flats are owner-occupied, and the conversion did not comply with the relevant building regulations in force at that time and still do not comply.

The NRLA requested a breakdown of the number of properties in the additional licensed area, with category one hazards that have been identified since the start of the scheme, with the reality being that very few inspections have taken place according to the FOI data. 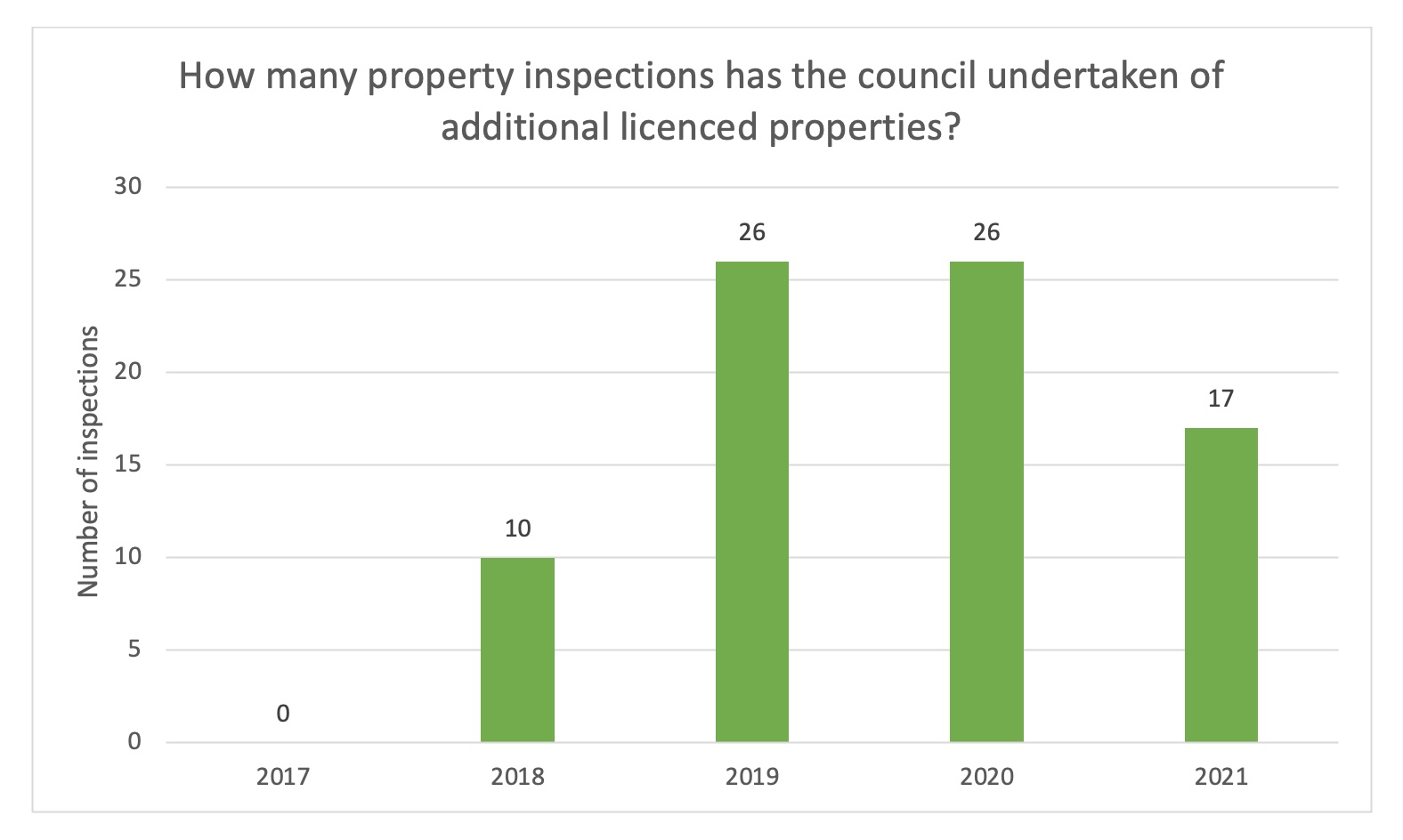 As part of a discretionary licensing scheme coming into force, landlords pay an enforcement element for inspections and general enforcement, which a local authority uses to carry out such activities. It is expected then the council will take a proactive approach as they generate the funds to do so.

The council prefaced these figures stating that they included proactive and reactive inspections of Additional Licensed HMOs. The number of HMO Compliance inspections has been fewer during the early part of the scheme, and efforts have been taken to significantly increase this number for the remaining period of the designation. Greenwich council further stated that during the application processing, each premise is subject to a comprehensive desktop risk assessment by the case officer, which is determined by a number of factors like the nature of the HMO, management arrangements, crowding and space in relation to meeting statutory minimum room sizes and the existence of fire safety measures.

Using the council's own figures, out of the estimated 6,500 HMOs that come under the scheme, from the start to May 2021, the council have only inspected 79 properties, just 1.2% of additional licenced properties over 44 months. Inspection rates remained relatively static during the pandemic, suggesting little impact on the number of inspections performed.

Category one and two hazards

The Housing Health and Safety Rating System (HHSRS) is a scoring system that is used by local authorities to assess the effect of certain hazards on the health, safety and wellbeing of the tenants residing in the property. This system allows a council to take action to remedy any hazards, ensuring the property is safe to live in. Twenty-nine hazards can be scored, including excess cold, dampness, mould, overcrowding, electrical hazards and structural failings. These hazards are risk-based assessed and come under the rating of either category 1 (serious) or category 2 (less serious).

The NRLA requested a year-by-year breakdown of the number of category 1 and 2 hazards that were identified and found in additional licenced properties over the course of the scheme so far. In total, 12 properties between 2017 and 2021 had category one hazards, and nine properties had category two hazards over the same period. With the council introducing this scheme for improving property conditions, the relatively low number of properties identified as having hazards coupled with the low inspection rate does not fulfil what the council set out under the legislation when introducing discretionary licensing.

Civil Penalty Use and Criminal Prosecution

The Royal Borough of Greenwich only introduced a civil penalty policy in 2019. They confirmed that in 44 months of the scheme, they have issued 7 civil penalties for properties that come under the additional licensing scheme. The council also confirmed that no criminal prosecutions had been carried out for any licensed property during the 44 months of the scheme so far.

The NRLA asked for a breakdown of how long, on average does it take for Greenwich council to process a licence application from receiving the application to decide (refusal or approval). The council stated that "It has taken a mean average of 287 days for an additional licensing application to be made from the point that it was received. There is no available data for timeframes concerning the refusal of licences". This works out to just over nine months for an application to be decided for licence holders. The council did not have information readily available for how long applications took when they ended in a refusal.

When it comes to introducing discretionary licensing, often as part of the process leading up to formal consultation, the council should provide some basis for the level of the fee being proposed, e.g., an estimate of the cost of the scheme, divided by the number of properties estimated to be licensed. This proposed fee should be reasonable and not excessive, ensuring that no profit is made from the licence fee revenue and activity is cost neutral. The licence fee for an additional licence in Greenwich is £408 per habitable room. This is the same as what the council charges for a mandatory licence.

The NRLA requested the total amount of licence fee income collected from this additional licensing scheme since the scheme has been in force up to 31st May 2021. The council stated that they had received £1,607,122.90 in licence fee in total. Since 2017, the fees have increased from £147.11 per household to £408 per household as of 2021. The fee structure for additional licensing is the same as for mandatory licensing. For landlords who are a member of an accreditation scheme or a landlord body, the council charges a reduced fee.

The formula to calculate the fee level that the council charges for an additional licence are split into administration and enforcement costs. Greenwich breaks this down as:

However, as already outlined, the council have not embarked on a proactive inspection regime during the additional licensing scheme so far, even considering the covid pandemic where local authority enforcement was reduced for a time.

When requested, the council confirmed that a total of 1,567 additional licence applications had been received from the council since the start of the scheme, with 727 licences being issued over the course of 44 months. Using the council's own figures, this works out to 24% of all HMOs applying for a licence in the borough and just 11% of HMOs being licenced in total.

Background of the Scheme

The council formally consulted on plans for a borough-wide scheme in November 2016 with a consultation that lasted for 12 weeks. In this proposal, the council wanted to reduce the number of anti-social behaviour incidents within HMOs and improve property conditions. Additional licensing was to be used alongside the council's 2014 manifesto commitment from the Labour Party to 'develop further schemes to ensure the availability of good quality private rented accommodation', as well as 'delivering a continued multiagency approach to improving standards in the privately rented housing sector, with the implementation of extended licensing schemes for landlords. The full 2016 consultation document can be found here

It is clear to see that the council has not taken a proactive approach during this additional licensing scheme, with a significantly low rate of inspections and hazards found within licenced properties. With such low engagement with licenced properties, the council have charged an enforcement element of a licence fee but has not carried out such activities on the majority of the HMOs in the borough. Greenwich council should focus instead on existing enforcement powers available to root out criminal landlords who let out substandard property instead of expensive licensing schemes.

At the time of writing, the council have not yet decided if a renewal of additional licensing will go ahead. However, a decision is expected to be made soon by the council cabinet.

The author of this blog, Samantha Watkin, is a Policy Officer at the NRLA

Please note that the views and opinions expressed in these blogs are those of the author and do not necessarily represent the views of London Property Licensing. These blogs are designed to stimulate discussion and debate within the property industry. This article does not represent legal advice and should not be treated as such.

For all the latest news and comment, you can sign up for the free London Property Licensing newsletter here

By accepting you will be accessing a service provided by a third-party external to https://pdpla.com/