Could the cladding scandal be the right target for an economic stimulus?

In this guest blogpost, Charlie Jameson, a leaseholder affected, discusses the cladding crisis, and identifies a need to assess the costs/ benefits of a 'Fire Safety Remediation Plan.'

The devastating Grenfell fire tragedy highlighted the serious flaws in UK building safety. First, it forced action to address the 30,000 flats with the same type of cladding on Grenfell. Now it has exposed 186,000 private high-rise flats wrapped in other flammable materials. Next it could leave up to 1.5 million modern flats, six percent of England's homes, un-mortgageable because they cannot prove their walls are safe.[i]

Since the 1980s, we've had a deregulated building sector in the UK which relies on non-mandatory guidance and limited oversight from part-privatised inspectors. This has seen combustible materials added to the outside of buildings in the form of cladding, balconies, windows, and insulation (see table below, taken from Pete Apps, Inside Housing[ii]) 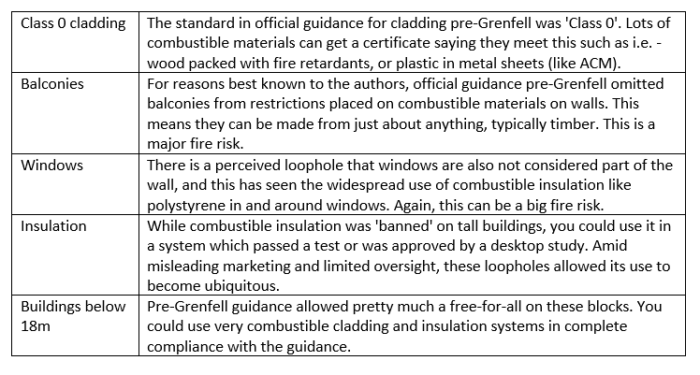 In this context of weak rules on fire safety, we also had a massive push for higher insulation standards through the 2000s and 2010s without asking serious questions about fire safety[iii]. The result is thousands of buildings with combustible walls. Add to this, our rules on general fire safety are some of the loosest in the world. One escape stair. No sprinklers. No alarms. Complete reliance on stay put. Then add falling construction standards, poor maintenance and some poor products like fire doors on the market.

So now we arrive at today. Around the country literally millions of people live in buildings that are either:

The current combined remediation funds come to £1.6 billion, but total cost of rectifying wider fire safety defects extending beyond cladding is estimated at £15 billion – a figure which will either be billed to leaseholders or taken out of social housing providers' budgets for new build or repair without government intervention[iv]. The most likely result is that much of the work will simply not be completed and homes will remain unsafe.

Alternatively, the government could step in and introduce a 'Building Safety Fund' to remedy all fire safety defects, regardless of building-height. The government could fund the work up-front, and then seek to recover it from any responsible parties or via a temporary levy on development. This would provide skilled jobs in a time of rapidly rising unemployment. Event crew who are used to working with Construction Design and Management regulations could be given employment in such a project. The money invested would flow to architects, designers, building suppliers, scaffolders, laborers, crane and haulage companies, potentially boosting national and local economies in a time of economic recession.

This alternative sounds appealing but there is a lack of evidence on its viability. How much would it cost for the government to bring all dangerous buildings up to a safe standard? And what would the likely impact of such a 'Building Safety Fund' be on employment outcomes and the wider economy?

As the UK Cladding Action Group (https://twitter.com/ukcag), we are looking to address these gaps in the evidence-base, to ensure that the cladding scandal is resolved as efficiently and equitably as possible. If you have any evidence or expertise regarding the questions above then please contact me, This email address is being protected from spambots. You need JavaScript enabled to view it..